Connect with us
Spread the love

Related Topics:
Up Next

Professional talent scouts the world over often attest to the fact that natural, home-spun talent remains largely overlooked on the nation’s blacktops, within urban choirs, and other intellectual centers. Few examples exemplify this like the dynamic talent of Georgetown tennis players, Roumania and Margaret Peters.

Between the late 1930s to the early 1950s, the sisters, affectionately nicknamed Pete (Margaret) and Repeat (Roumania), dominated the Black tennis circuit. Touring with the American Tennis Association, the nation’s most prolific African-American sports club, the sisters’ records would eventually include winning 14 doubles titles in 15 years. The American Tennis Association (ATA) founded on November 30, 1916 by more than a dozen Black tennis clubs is an all-black tennis association that functioned parallel to the white-only United States Lawn Tennis Association (USLTA).Trained on the Rose Park playground across from their Georgetown home, the Peters sisters often practiced for hours each day to perfect their considerable techniques.

“These young girls were the precursors to Althea Gibson, Venus and Serena Williams, and Naomi Osaka, in the sense that they would not allow the restrictions and barriers placed in their way to stop them from achieving their goals,” sports historian Jarricka Ward told The Informer. “The Peters sisters challenged racism – whether experienced in Georgetown, towns surrounding Tuskegee, or on the world stage – by whipping the tails of their opponents and shutting the mouths of the naysayers.”

Blackface: The Birth of An American Stereotype

Historian Dale Cockrell once noted that poor and working-class whites who felt “squeezed politically, economically, and socially from the top, but also from the bottom, invented minstrelsy” as a way of expressing the oppression that marked being members of the majority, but outside of the white norm. Minstrelsy, comedic performances of “blackness” by whites in exaggerated costumes and make-up, cannot be separated fully from the racial derision and stereotyping at its core. By distorting the features and culture of African Americans — including their looks, language, dance, deportment, and character — white Americans were able to codify whiteness across class and geopolitical lines as its antithesis.

“The whole idea of a stereotype is to simplify.”

The pervasiveness of stereotypical images like these made the civil rights efforts of African Americans even more difficult. The black people represented here were irresponsible, laughable, and difficult to understand. If white people accepted these stereotypes, it became that much easier to deny African Americans the full rights of citizenship. 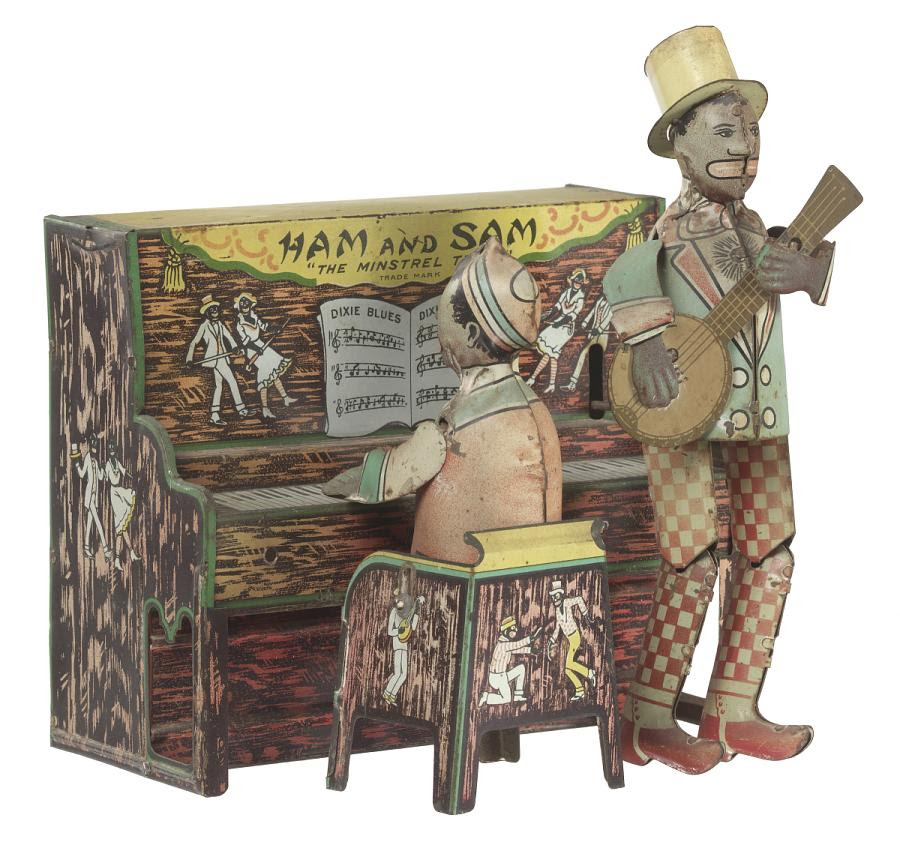 The first minstrel shows were performed in 1830s New York by white performers with blackened faces (most used burnt cork or shoe polish) and tattered clothing who imitated and mimicked enslaved Africans on Southern plantations. These performances characterized blacks as lazy, ignorant, superstitious, hypersexual, and prone to thievery and cowardice.

Thomas Dartmouth Rice, known as the “Father of Minstrelsy,” developed the first popularly known blackface character, “Jim Crow” in 1830. By 1845, the popularity of the minstrel had spawned an entertainment subindustry, manufacturing songs and sheet music, makeup, costumes, as well as a ready-set of stereotypes upon which to build new performances. 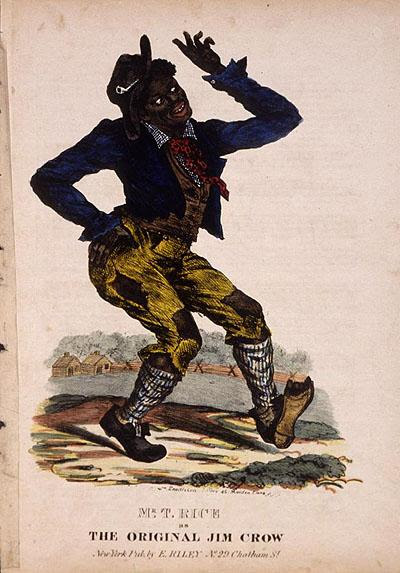 Blackface performances grew particularly popular between the end of the Civil War and the turn-of-the century in Northern and Midwestern cities, where regular interaction with African Americans was limited.

White racial animus grew following Emancipation when antebellum stereotypes collided with actual African Americans and their demands for full citizenship including the right to vote. The influence of minstrelsy and racial stereotyping on American society cannot be overstated. 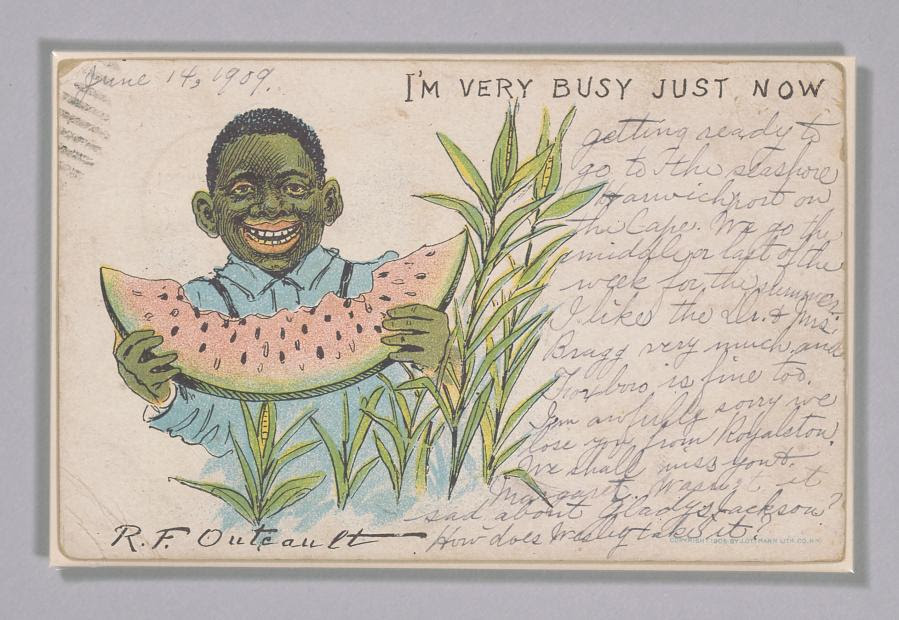 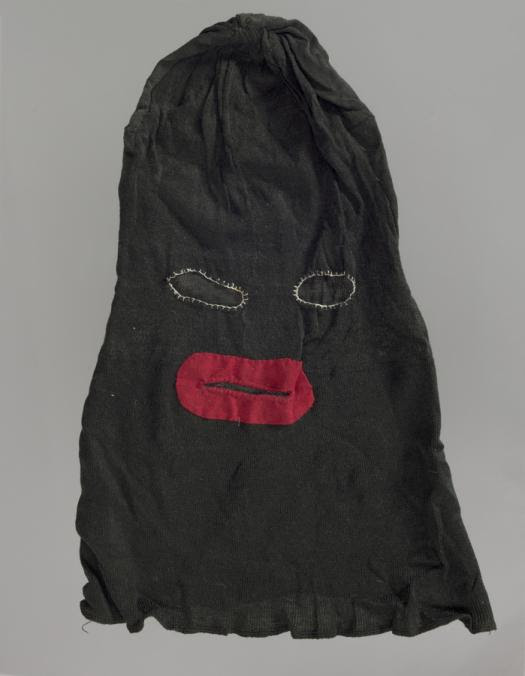 Blackface and the codifying of blackness — language, movement, deportment, and character — as caricature persists through mass media and in public performances today. In addition to the increased popularity of “black” Halloween costumes, colleges and universities across the country continue to battle against student and professor blackface performances. In each instance, those facing scrutiny for blackface performances insist no malice or racial hatred was intended.

Top: Billy Van, the monologue comedian, 1900. This image is available from the United States Library of Congress’s Prints and Photographs division under the digital ID var.1831

Second from top: Tin windup toy of “Ham and Sam The Minstrel Team.” Collection of the Smithsonian National Museum of African American History and Culture, Gift of the Collection of James M. Caselli and Jonathan Mark Scharer

Third from top: Cover to early edition of Jump Jim Crow sheet music. Thomas D. Rice is pictured in his blackface role; he was performing at the Bowery Theatre (also known as the “American Theatre”) at the time. This image was highly influential on later Jim Crow and minstrelsy images. Institute for Advanced Technology in the Humanities at the University of Virginia.

Fourth from top: Postcard depicting a caricatured boy eating a slice of watermelon. Collection of the Smithsonian National Museum of African American History and Culture, Gift of the Collection of James M. Caselli and Jonathan Mark Scharer.

Bottom: A blackface mask. Collection of the Smithsonian National Museum of African American History and Culture, Gift of the Collection of James M. Caselli and Jonathan Mark Scharer.

Here is a terrific shot of homes being built in Anacostia. This was taken around 1919 and this row appears to be the 1900 block of 16th St. SE. Check out the Google Street View below…
Check this out »

Black Is King Does Everything It Needs To

9 of the Most Important Instagram Trends to Watch Right Now

Black Is King Does Everything It Needs To

‘Black Is King’: Beyoncé’s visual album is a feast of fashion and symbolism